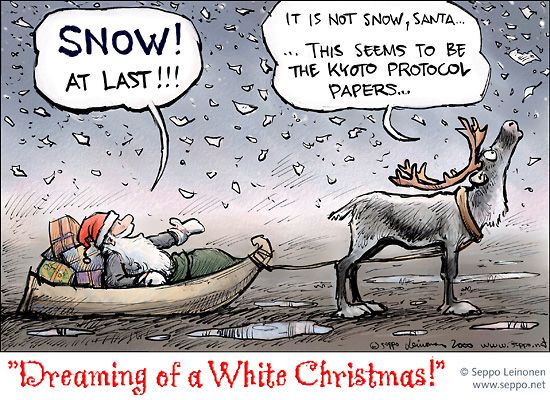 It would be fun to draw a positive and cheerful cartoon about the brave pioneers who struggle for decent climate policy. Unfortunately the current actions of European Union do not inspire for that at all…

I made the cartoon above for Christmas 2000. At that time George W. Bush “won” the Presidency of the United States. Bush declared that the global warming was not man made. He said also that USA is not going to ratify the Kyoto Protocol, at the same time the European Union called for more efficient actions to tackle climate change.

Now it seems that the tables are turning. Barack Obama says he will show leadership on the issue of climate change when he takes office, reports the Guardian. On the other hand in Poznan the European Union managed to avoid concrete actions to reduce emissions, and and I’m sorry to say Finnish Government was one of the worst players there lobbying for shortsighted benefits of Finnish industry.

“This was a moment in time when real leaders would have stepped up and taken the positions that would combat the economic and climate crisis at the same time, Instead, industrialized countries preached sermons about the importance of climate protection in the Poznan plenary while lacking or attacking policies to make it happen at home – a serious sign of climate hypocrisy.”