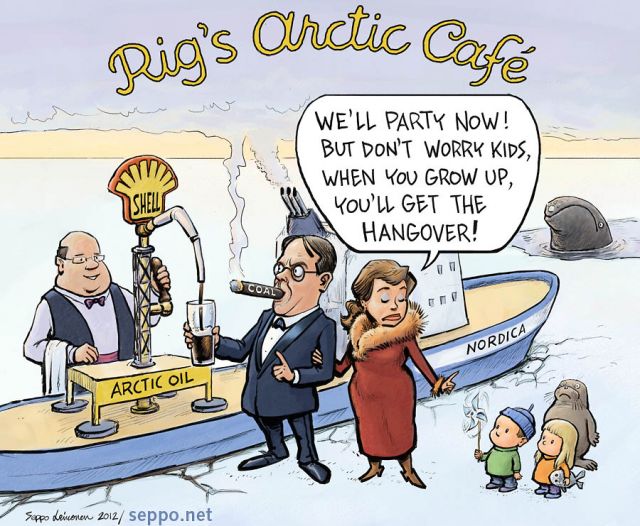 Shell is starting a dangerous adventure to drill oil in the Arctic. It is a risky business to operate in that harsh environment, and quite impossible to clean the environment, if an oil spill happens. Also, our warming climate doesn’t need any excess fossil coal emissions.

Not everybody is happy about the Arctic oil drilling. For example Greenpeace has campaigned against the Shell adventure. You also can help to stop this Arctic hysteria, by signing the Save the Arctic petition.

When the former Nokia CEO Jorma Ollilla became the Non-Executive Chairman of Shell in 2006, he warned about the global warming and wanted to promote new renewable technologies, like solar and wind energy, to tackle the climate change. Helsingin Sanomat newspaper January 30th 2007: New mission for Jorma Ollila: fighting climate change Chairman of the Boards of Nokia and Shell Oil wants to spread warning of global warming:

“…Ollila has agreed to the interview because he feels that carbon dioxide emissions must be reduced much more quickly than is now happening. To achieve this, he says that governments need to impose restrictions on corporations and others. “Otherwise the earth cannot take it.”…”

Recently Jorma Ollila has  been quite silent about these issues.