GM canola escapes into the wild 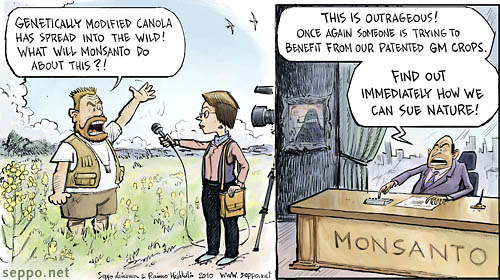 Genetically modified canola has escaped into the wild. Actually, two varieties of it have – one modified to be resistant to Monsanto’s Roundup herbicide, and the other to Bayer Crop Science’s Liberty herbicide. Scientists have also found out that these two transgenic verieties have interbred, so a brand new brand of canola has been born in the wild, and it is resistant to both the Roundup and the Liberty herbicides! Doesn’t that feel a bit like Jurassic Park coming alive?

And how to root out this brand-new canola brand from the wild? It might be a bit tricky. Spray the suspected areas with both Roundup and Liberty? Then use some other herbicide to eradicate the new super weeds that survived the above? Sounds a bit like a witch trial. There must be a better solution…

The story on how Cynthia Sagers and her research team from the University of Arkansas discovered the wild GM canola is found in Nature magazine.

Update:
Richard Black writes in BBC News also about the possible risks of GM canola in the wild: GM plants ‘established in the wild’:

“Over time, the build-up of different types of herbicide resistance in feral canola and closely related weeds could make it more difficult to manage these plants” Professor Alison Snow, Ohio State University.”

3 Responses to GM canola escapes into the wild