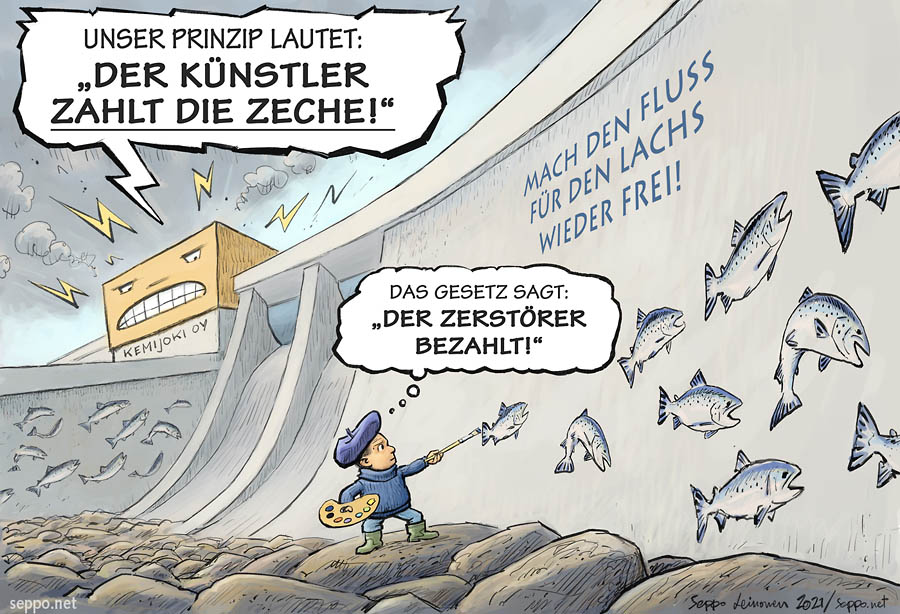 Activist to Pay Compensations to Power Company for “Damaging the Dam” with Art! 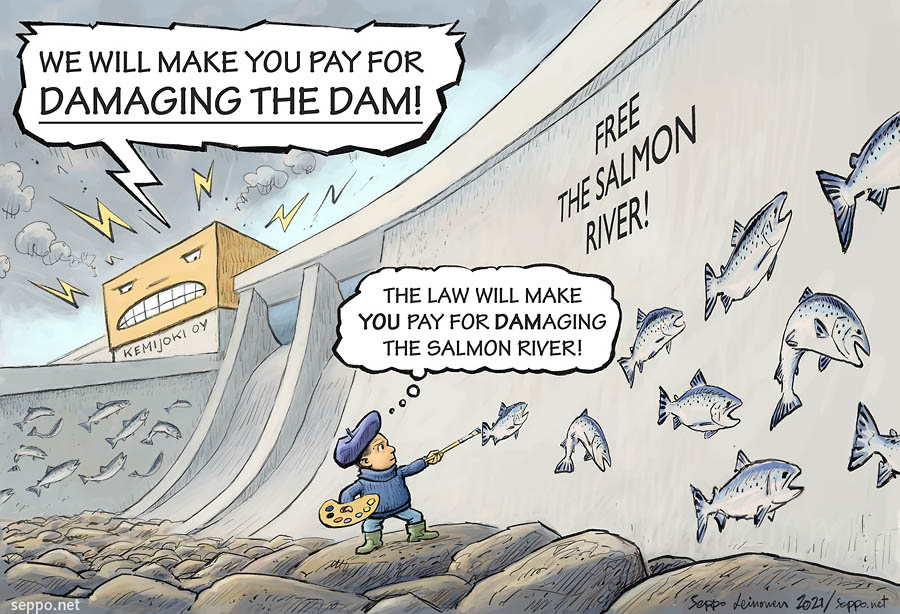 The Kemijoki River in Northern Finland was once maybe the best salmon river in Europe.

The river was dammed after the World War II, and no fish passages were built, so the local salmon population was lost.

Kemijoki Ltd has now 16 hydro power plants in the Kemijoki River. The company wants to build one more with no fish passages. The planned Sierilä dam would drown the last free-flowing part of the river’s main channel under the dam reservoir.

The fisheries authorities have started a legal process requiring the power stations to build fish passages across all dams and to restore breeding areas.

Professor and activist Vesa Puuronen, who lives by the Kemijoki River, painted pictures of salmon and slogans ”Free Kemijoki”, ”Free Salmon Rivers”, ”Save Mother Earth” on the walls of the power plants.

The power company sued him, and now he has to pay 20 000 euros as fines and compensations for damaging the dams.

A news story translated in English by Google:
Kemijoki Oy’s buildings were spray-painted as a protest against hydropower 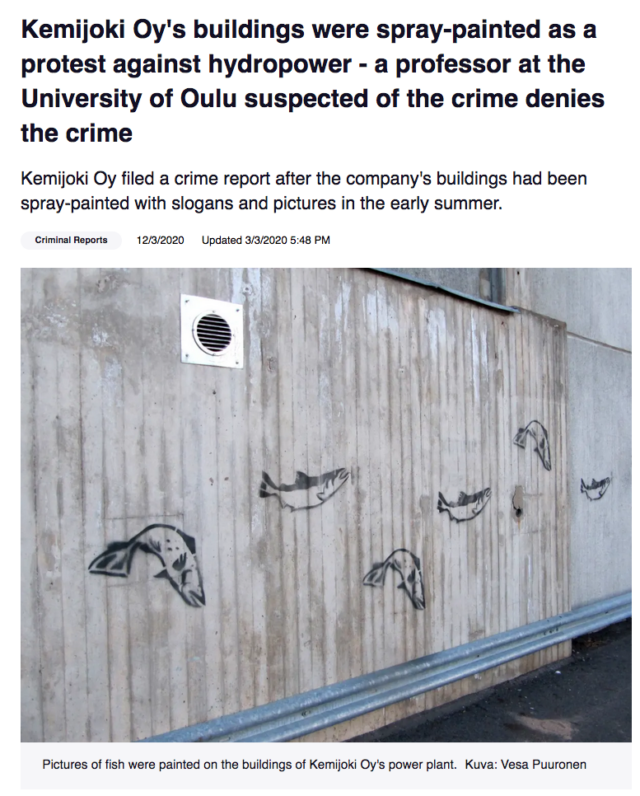 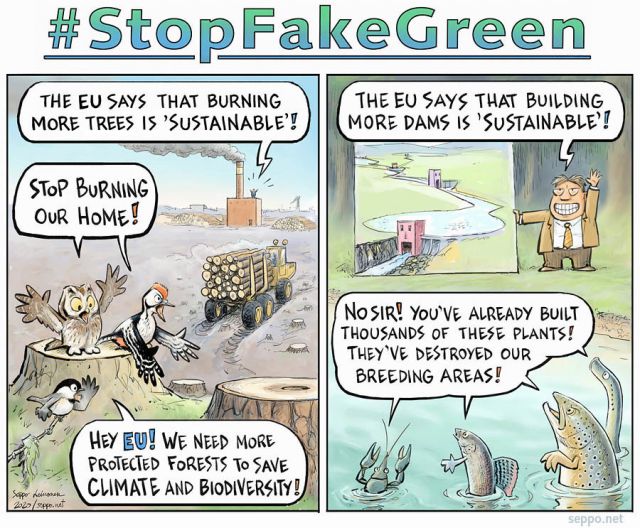 WWF EU: “130 NGOs and experts are sounding the alarm on the EU’s green finance rules, the ‘Taxonomy’, and calling for them to be rooted in science. In a detailed joint statement, the groups flag and analyse ten priority areas of concern in the European Commission’s draft, which covers which sectors can be classed as ‘sustainable’ in terms of their climate impacts. The ten areas range from fossil fuels, bioenergy and hydropower to livestock and hydrogen. In many of them, the European Commission appears to have ignored the recommendations of its own Technical Expert Group on the Taxonomy, which were largely science-based and robust…” 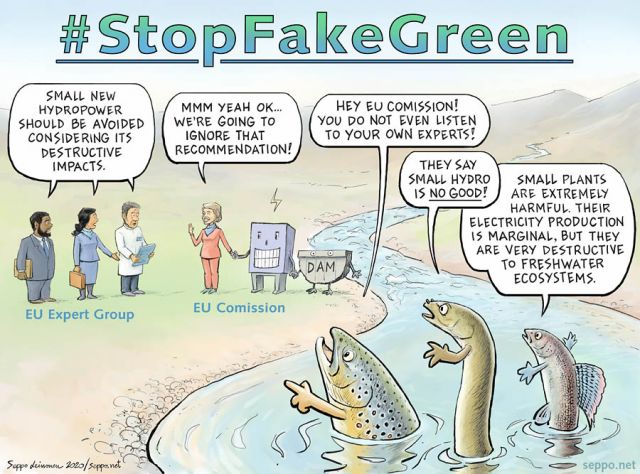 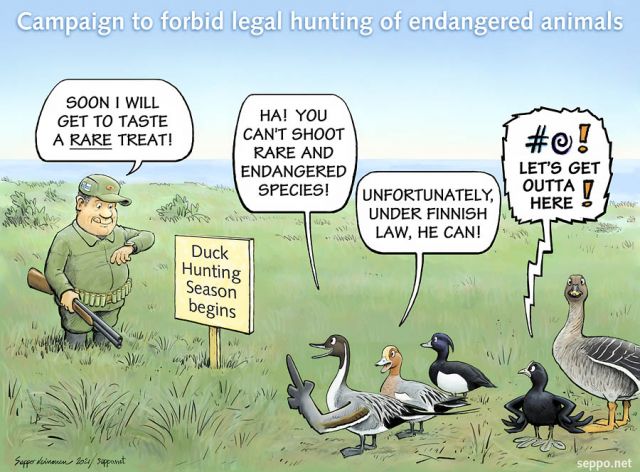 In Finland the law allows hunting of 17 threatened species. That is unbearable.

A group of Finnish individuals has put up a Citizens’ intiative to change this law. If at least fifty thousand Finnish citizens entitled to vote will sign this initiative, it will move forward to the Parliament. 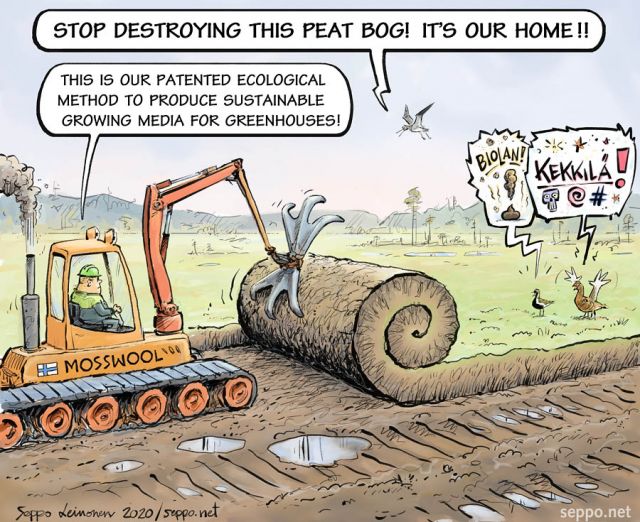 In Finland it is allowed to peel off the vegetation and the surface layer of peat from peatlands without an environmental permit. It is not even required to inform the authorities of this activity.

Peat industry claims that this is an “environmentally friendly” way to produce growing media for gardening and greenhouses. But in practice harvesting has been done on unditched open peatlands, which possess considerable ecological values.

Peatlands are unique communities that can be destroyed in a matter of days but require thousands of years to form naturally. Even removing the surface layer obliterates the peatland’s natural flora and fauna, and its recovery will take dozens of years. 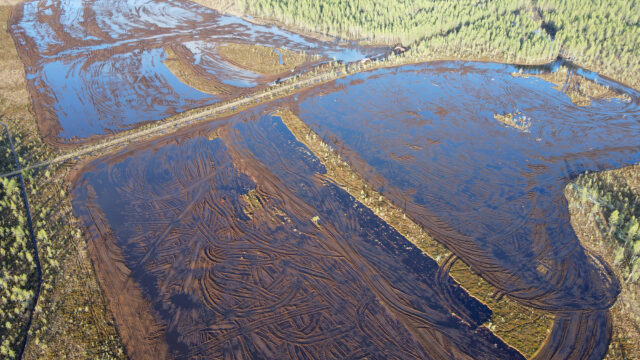 This Kivisalmenneva mire was peeled by Biolan, a Finnish company that produces growing media from peat, compost and sphagnum moss.